All the flavors of pumpkin pie blended into a thick and creamy, healthy smoothie. Makes for a great breakfast, snack, or dessert! It’s vegan, gluten-free, and refined sugar free.

What kind of pumpkin should I use?

For this recipe pure canned pumpkin puree works best. I stock up on several cans whenever I see them on sale at the beginning of pumpkin season in late September (they sell out quickly!). However you can usually find them all year-round in major grocery stores. Be sure NOT to use canned pumpkin pie filling. It looks very similar so be sure to read the label. Canned pumpkin pie filling has tons of added sugar and often trans-fat, which you should try and limit. If you’re feeling “extra” you can make your own pumpkin puree!

What can I sub for almond butter?

If you don’t have any almond butter on hand, feel free to sub peanut butter, cashew butter, sunflower seed butter (tastes similar to peanut butter but is allergen-friendly for those who are allergic to nuts), or any other nut/seed butter you want for this pumpkin pie smoothie! Peanut butter and pumpkin pair nicely together, but if you are struggling with Candida Overgrowth, avoid peanuts as they contain high amounts mold which produce mycotoxins.

This pumpkin pie smoothie tastes like dessert but is loaded with nutrients from the following ingredients!

Pumpkin: lower in starch than their sweet potato and winter squash cousins, high in beta-carotin which makes Vitamin A- which is great for your eyesight!

Pumpkin Seeds: makes a great crunchy topping and is a good source of protein for plant-based eaters. These seeds are also high in fiber and magnesium!

Spinach: There’s a reason pop-eye loved his spinach! It’s a powerhouse of nutrients including Vitamins A, C, K, and iron, which helps to improve oxidative stress, eye health, and blood pressure. 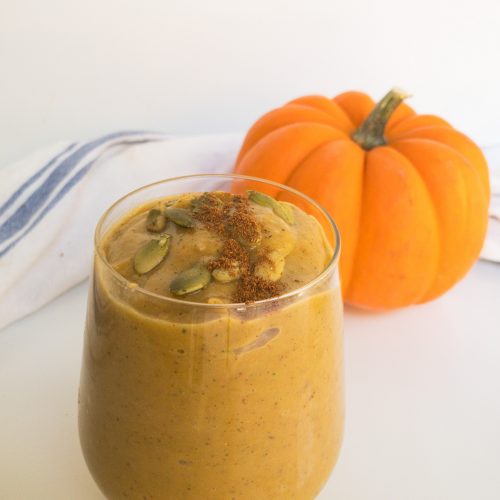 Wondering what to do with that awkward amount of leftover canned pumpkin puree? This thick and creamy smoothie makes a healthy breakfast or snack on the go and tastes just like pumpkin pie! The protein, fiber and nut butter will keep you satisfied for longer and you won't miss all those added sugars which would lead you to a sugar crash an hour later!
Print Recipe Pin Recipe
Prep Time 5 mins
Cook Time 0 mins
Course Breakfast, Dessert, Snack
Cuisine American
Servings 1 person